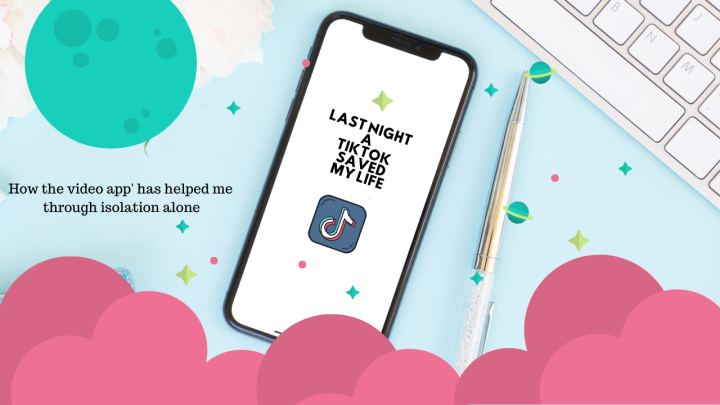 As lock-down rumours swirled in the office and shoppers began to stockpile Pasta ’N’ Sauce packets like it was freshers’ week again, I started to ponder over the inevitable self-isolation and what that would look like for me as a twenty-something year old single, self-employed woman living by herself. I’m no stranger to sitting with my own company, having combatted – and suprisingly enjoyed -the dreaded cinema date for one a handful of times, and enjoyed several solo house parties dancing around the kitchen in my faded granny pants. But the thought of a forced lockdown, where I’m not the one deciding to cancel my own Friday night plans in favour of lounging in my slacks and bingeing Ru Paul’s Drag Race, but instead being Government ordered to partake in the social distancing I regularly placed upon my social life, weighed heavy on the heart. I fumbled with the idea of going to stay back with my parents in West Wales, the child-like fear of the unknown creeping over me as toilet-paper gate unfolded in the press. But with no bedroom of my own to go back too, no bath to sit for hours and watch ‘Tiger King’ in and the guaranteed judgement passed by my Dad on my daily wine consumption, I decided to tough it out and tackle this open-ended lockdown alone like the strong, independent woman I am. Just me, my wine and my new BFF TikTok.

I sat watching as Boris Johnson addressed the nation, a glass of Malbec in one hand, my iPhone glued firmly in it’s usual position in the other. As four long weeks spent in my flat alone stretched out ahead of me, I took a heavy gulp of goodness and decided it was time to download the one app I had promised myself I would never get involved with- TikTok. And it turns out I wasn’t alone, with over 300,000 Brits’ downloading the app in the first week of lock-down! TikTok is a video-sharing social platform, which allows it’s users to create short videos upto a minute long. Much like it’s predeccesor ‘Vine’, the platform is full of funny memeable moments, along with DIY hacks, beauty tips and the infamous TikTok dance routines. In April 2020 it reached the incredible figure of 2billion downloads, joining the likes of Facebook and Whatsapp, and cementing it’s place in the Social Media Hall of Fame. Before lock-down, I hadn’t given the platform much thought, other than name-dropping the app in an assembly I was giving at a school for Year 5 and 6 children, in the hopes of gaining a few brownie points. After the assembly, a little girl no older than eleven ran up to me and excitedly quipped “Miss you have to give me your TikTok username!”. I laughed and admitted to her that I hadn’t got an account – “I’m too old for TikTok!” I proclaimed, flattered that she thought this ancient guest-speaker was cool enough to be on a social media platform popular with school kids. “No you’re not! You should get it!”, passing up her her innocent recommendation as she skipped back to class. Little would she know that her excitement around my should-be participation on the app, would plant a seed of curiousity which began to flower in my lonesome lock-down mind.

I had always been weary of the platform due to the main peg being that it is full of funny content; fifteen-second clever quips that went viral fast. Over the years I’ve built up a large following on Instagram and Twitter of over 300,000 followers, and although I like to think I can share a sharp tweet or two, filming myself acting out mini-sketches was certainly way out of my comfort zone. I wouldn’t know where to start. And what if people didn’t find me funny? And how do you get followers? And views? I have had a large following ever since I began using social media when I was 18, and the thought of building a following from scratch and not relying on filtered half-naked pictures of myself to get likes was a daunting prospect, but it was also pretty thrilling.

On this platform, I can be whoever I wanted to be, with no pressure to conform to beauty standards. The weirder and the sillier your content is on TikTok, the more views you get! I quickly learnt how to use the basic filming features, the self-timer and the effects, and trawled through the ‘For You’ pages saving some sounds for future use and garnering up some inspiration. I tapped up my friend who had also recently began to use the platform and they shared some tips with me about using hashtags – the most popular ones include fyp, foryoupage, tiktoktraditions and funny – naturally! They also told me how posting regularly had a huge affect on getting your videos seen. Sure, some people become one-hit wonders and their only post goes viral, but for most it’s a grinding process of churning out content and seeing little results for a while. The algorithm seems to be a thing of luck, with some people hitting millions of views on their first go, and others posting thirty videos without one of them topping 10,000 views. But the fun thing about TikTok is that the views don’t really matter, because the best bit about the platform is actually creating the content itself. I began to spend hours filming videos without even noticing time passing by. I would make notes in my phone of ideas I had for videos, and genuinely laughed out loud everytime I would scroll the explore pages. In a time which had the potential to see me relish in my loneliness and the horrors which unfolded outside my door, TikTok provided me with an escape from reality in fifteen-second bites.

After a few weeks pumping out some peak content (humble!) into the platform, with only a few nibbles at big viewing numbers here and there, it finally happened. I went viral. A video of me making a joke about answering a boys’ 2am ‘You up?’ text was swept up somehow into the mystery of the algorithm, and hit its first 100,000 views in two days. After reaching this figure, they almost started doubling overnight. From 200, to 300, and now sitting at a cool 690,000 views and counting, in less than two weeks. And even though the platform is enjoyable without the big hitting numbers, it sure does give you an adrenaline hit when you watch the views roll in at over half a million! Since then, I’ve struggled to get passed 5,000 views on a lot of my posts, a humbling experience that sits to remind me why I enjoyed participating in the platform in the first place.

I’ve had a TikTok account for just over six weeks. I’ve posted over fifty videos, grew my following to over 5,000 and have had over 1.2million views on my videos in the last 28 days alone. If we weren’t in isolation, I probably wouldn’t have even thought of downloading the app, but I’m so pleased I did. Although it’s community guidelines can be a little heavy handed (my posts have been flagged for wearing a sports bra, using any swear words and having my legs on show) I truly enjoy filming silly sketches in my flat to share with the World, and scrolling through the explore pages to see other peoples’ hilarious creations! TikTok has given me a platform to share my personality, rather than the still images of myself people have become used to seeing on Instagram. I’ve received so many messages on Insta’ from people sharing how they didn’t know I was ‘funny’ before, and it really made me realise how reserved I was being online in sharing my true self. Don’t be afraid to try something new and be silly, we all need some light-relief at the moment: starting with fifteen- seconds of laughter at a time!